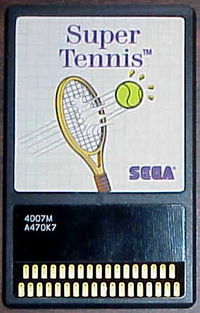 The Sega Card (known in Japan as "My Card") is a memory card format used to store games for the SG-1000 / SC-3000 and the Sega Master System. The cards were plugged into onboard cardslots or into compatible adapters. Several versions of the format were created, including a rewritable one that allowed new titles to be downloaded to a card.

While substantially cheaper to produce than cartridges, the storage limitations of the format resulted in Sega publishing only a dozen games in the format (1986–1987) before moving to using solely game cartridges. The revised model of the Sega Master System, Sega Master System II had no Sega Card support, reflecting Sega's move away from the format.

There were four versions of the card.

The second version of the card was for the Sega's Japan-only Mark III. The Mark III is also backwards compatible with SG-1000 My Cards through the "Mega adapter" device.

The third version of the card, called the "Sega Card" was released for the Master System, the international version of the Mark III. The Power Base Converter has a card slot allowing for use of the cards on the Mega Drive.

The final version of the format was the My Card EP, a rewritable version that was test marketed only in Japan.