The Master System, often called the Sega Master System or SMS, is a third-generation video game console that was manufactured and released by Sega in 1985 in Japan (as the Sega Mark III), 1986 in North America, 1987 in Europe and 1989 in Brazil.

The original Master System could play both cartridges and the credit card-sized "Sega Cards," which retailed for cheaper prices than cartridges but had lower storage capacity. The Master System also featured accessories such as a light gun and 3D glasses which were designed to work with a range of specially coded games.

The Mark III was built similarly to the SG-1000 II, with the addition of improved video hardware and an increased amount of RAM.

The system was backwards compatible with earlier SG-1000 titles. As well as the standard cartridge slot, it had a built-in slot, formerly known as expansion slot for Sega My Cards, which were physically identical to the cards for the Sega SG-1000 "Card Catcher" add-on. While in Japan there were many titles in this format published for both the SG-1000 and Mark III, only a few were published in the West. 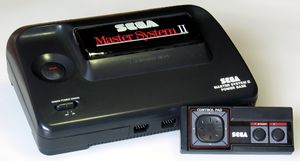 PAL version of Master System II
The Master System II was released in 1990, and was popular in Europe and Brazil. It is smaller and sleeker, but in order to keep production costs low, it lacks the reset button, composite video and card slot of the original. All consoles included a game that plays when no cartridge is inserted. The built-in game was originally Alex Kidd in Miracle World, which was switched to Sonic the Hedgehog on later PAL consoles.

There are two variants of the Master System II - black with a black pause button, and grey with a white pause button - there is no other difference between the two. The former is more common in PAL regions, and was never sold in North America.
Power: 9V 600mA

The latest version, released in 2009 by Tectoy, is the "Master System Evolution", as a successor to "Master System III". It is a "console on a chip", a similar design to its antecessor but with 1 more game, a total of 132 built-in Sega Master System games. It ships with two six button controllers and two different colors of the console exist.