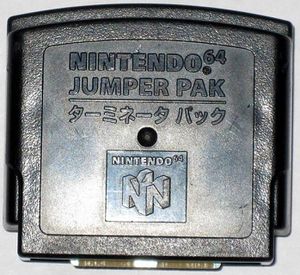 The Jumper Pak (ターミネータ パック Terminator Pack) is a filler that plugged into the console's memory expansion port. It serves no functional purpose other than to terminate the RAMBUS bus in the absence of the Expansion Pak. This is functionally equivalent to a continuity RIMM in a RAMBUS motherboard filling the unused RIMM sockets until the user upgrades. Early Nintendo 64 consoles (prior to the Expansion Pak's release) came with the Jumper Pak included and already installed. Jumper Paks were not sold individually in stores and could only be ordered individually through Nintendo's online store. The system requires the Jumper Pak when the Expansion Pak is not present or else there will be no picture on the TV screen.