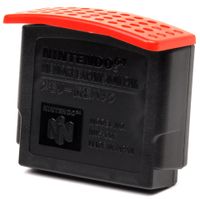 The Expansion Pak (拡張パック Kakuchō Pakku) is a hardware add-on for the Nintendo 64 console, released in 1998. When plugged into the top of the console it upgrades the Random Access Memory (RAM) from 4MB to 8MB, allowing games to use higher resolution textures, process more map data and allow for more NPC usage.

Some game developers made quick use of this 4MB RAM boost. The only games that require the Expansion Pak to play are Legend of Zelda: Majora's Mask and Donkey Kong 64, whereas other games that utilized the peripheral only used it for a general boost in frame rate, to add more levels or increase texture resolution.