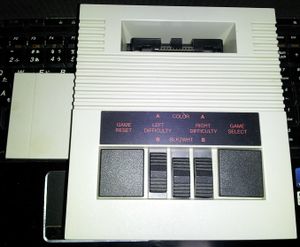 The System Changer, developed under the code name Portofino (after the Redondo Beach hotel where the first design meeting was held), was introduced in 1983 just so Intellivision could be advertised as the system that played the most games.

Many people expressed amazement that the Intellivision's processor could emulate an Atari 2600. Well, it can't. The System Changer is itself simply an Atari 2600 clone -- essentially a 6507 processor, a TIA (Television Interface Adaptor) video/sound chip, and a 6532 RIOT chip (128 bytes RAM, I/O ports, and a general purpose timer). The System Changer only uses the Intellivision for its power supply and RF modulator.

Although Atari threatened to sue, Mattel's lawyers concluded that it would be legal to clone 2600s since they contained all off-the-shelf hardware and no copyrightable software (as an Intellivision or Colecovision does). No lawsuit appeared, and clones started appearing from other companies.

Don't bother opening a System Changer to read what the chips are. Instead of being housed in the familiar DIP (multi-pin) packages, the integrated circuits are soldered directly to the printed circuit board using microscopic wires, then protected with a blob of epoxy. This cost saving technique was also used in most of the later game cartridges.

Intellivision (and its clones -- the Tandyvision One, Sears Super Video Arcade, any of the INTV Master Components) requires a circuit-board modification. Mattel used to perform this modification for people who brought their units to a service center.

Following are the instructions used by the service centers for making the modification.