The Retro Duo is a video-game clone console developed by Retro-Bit and distributed by Innex, Inc. The Retro Duo is an 8-bit and 16-bit video game console. It was designed to fit the needs of 8-bit and 16-bit console gamers and plays game cartridges for the NES, SNES/SuperFamicom. There have been quite a few clone systems made in recent years, but the difference with this one is that it plays American, European, and Japanese games and has the highest compatibility over any other clone system. Another notable difference is that S-video is now compatible when playing SNES games. The console is not licensed by Nintendo and is not fully compatible with every game released for the two game systems; however, the majority of games will function properly. While it has only been released in Canada and the United States, it can still be used in Europe and Japan with a power plug adapter. 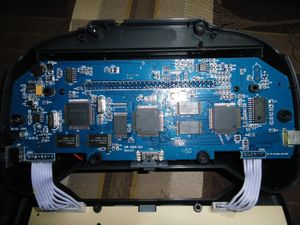