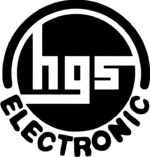 HGS Electronic was a german manufacturer of radios and consoles towards the end of the 70s.

Comes in green or orange variants (only the buttons and knobs).