The AY-3-8500 "Ball & Paddle" integrated circuit was the first in a series of ICs from General Instrument designed for the consumer video game market. These chips were designed to output video to an RF modulator which would then display the game on a domestic TV set. The AY-3-8500 contained six selectable games: tennis (AKA Pong), soccer, squash, practice, and two rifle shooting games. The AY-3-8500 was the 625 line (i.e. PAL) version and the AY-3-8500-1 was the 525 line (i.e. NTSC) version. It was introduced in 1976. A minimum number of external components are needed to build a complete system.

The AY-3-8500 was the first version. It played seven Pong variations. The video was in black and white, although it's possible to colorize the game using an additional chip such as the AY-3-8515.

Six selectable games for one or two players were included: 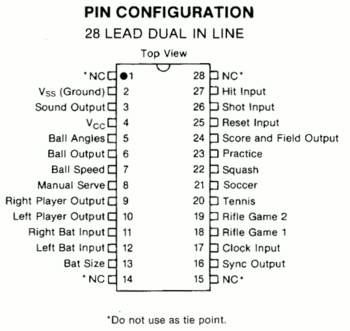 The AY-3-8500 was designed to be powered by six 1.5V cells (9V). Its specified operation is at 6-7V and a maximum of 12V instead of the 5V standard for logic. The nominal clock was 2.0 MHz, yielding a 500ns pixel width. One way to generate such a clock is to divide a 14.31818 MHz 4X colorburst clock by 7, producing 2.045 MHz. It featured independent video outputs for left player, right player, ball, and playground+counter, that were summed using resistors, allowing designers to use a different luminance for each one. It was housed in a standard 28-pin DIP.