The Sega Mega-CD (メガCD Mega Shī Dī) (released as the Sega CD in North America) is an add-on device for the Sega Mega Drive/Genesis video game console, designed and produced by Sega. The device adds a CD-ROM drive to the console, allowing the user to play CD-based games and providing additional hardware functionality. It can also play audio CDs and CD+G discs.

The first version of the Mega-CD sits underneath the Mega Drive console and loads CDs via a motorized tray. A second version places a top-loading CD-ROM drive to the right of the console and is intended primarily for use with the redesigned Mega Drive II. Both versions of the Mega-CD are compatible with the initial two versions of the Mega Drive console, but not with the Genesis 3. There is also a Mega-CD module, used as an add-on device available for the Pioneer LaserActive system. 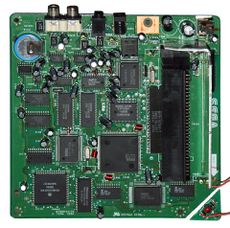