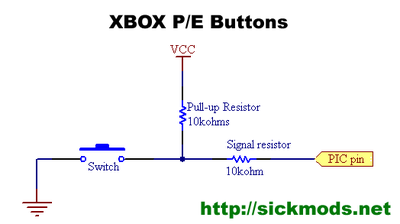 To fix this problem, you must bypass the trace. There are two ways to go about this: the safer but more difficult way is to recreate the proper schematic for the power switch, which will require you to solder directly to the signal resistor, which is surface-mounted and thus easy to damage. It's also located on the top of the board, whereas the test point you solder to for the connection to the PIC chip is on the bottom. However, there is an easier way: simply bypass the signal resistor. You can solder directly to the socket that the front panel plugs into on the motherboard, which is much easier to do. I bypassed the signal resistor when repairing my Xbox and have not had a single issue, so the resistor does not appear to be necessary. It probably exists to prevent fluke power surges. This guide will explain how to do the repair by bypassing the resistor; if you wish to keep the signal resistor in the circuit, see the guide in the helpful links section. Continue at your own risk!