From Game Tech Wiki
Revision as of 11:53, 23 May 2013 by Viper666 (talk) (Created page with "thumb The Virtual Boy (バーチャルボーイ) was a table-top video game console developed and manufactured by Nintendo. It was the first video ga...")
(diff) ← Older revision | Latest revision (diff) | Newer revision → (diff)
Jump to navigation Jump to search 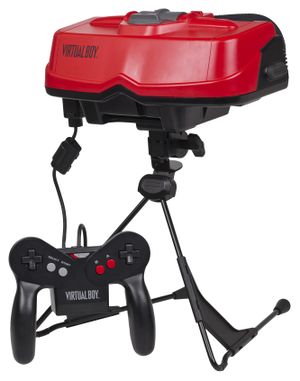 The Virtual Boy (バーチャルボーイ) was a table-top video game console developed and manufactured by Nintendo. It was the first video game console that was supposed to be capable of displaying "true 3D graphics" out of the box, in a form of virtual reality. Whereas most video games use monocular cues to achieve the illusion of three dimensions on a two-dimensional screen, The Virtual Boy creates an illusion of depth through the effect known as parallax. In a manner similar to using a head-mounted display, the user looks into an eyepiece made of neoprene on the front of the machine, and then an eyeglass-style projector allows viewing of the monochromatic (in this case, red) image.