Unlike the Mega-CD, its compact size and addition of a headphone port enabled it to play audio CDs on the move, powered by two AA batteries. However, unless high end batteries such as lithiums were used, it would drain the batteries fairly quickly. The unit featured front-mounted CD control buttons as well as a backlit LCD screen to display the track number. An extra line-out port was provided for connection to stereo equipment. However, games could only be played while the unit was powered by its main PSU and connected to a television, unlike the portable Sega Nomad. 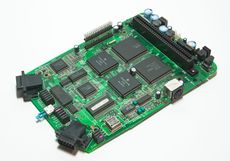