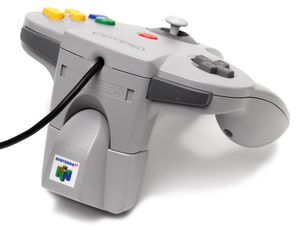 Several thirdparty versions of the Rumble Pak, such as the Tremor Pak, followed. Some draw power from the controller instead of batteries, but the lower power makes them less effective. The TremorPak Plus allows a memory card to be inserted simultaneously, eliminating the need to switch between two accessories. The Nyko Hyper Pak Plus contains internal memory and allows the user to adjust the amount of feedback between "hard" and "too hard".