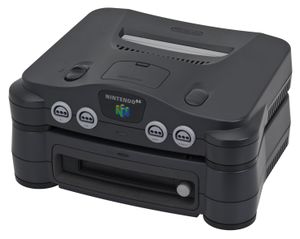 For information about emulating the Nintendo 64DD, see 64DD emulation.

The Nintendo 64DD (ロクヨンディーディー) ("DD" being short for "Disk Drive", and originally "Dynamic Drive") is a peripheral for the Nintendo 64 game console. It plugged into the N64 through the EXTension Port on the Nintendo 64's underside, and allowed the N64 to use proprietary 64 MB magneto-optical disks for expanded data storage. Although it had been announced before the launch of the N64, the 64DD's development was lengthy. It was eventually released in Japan when the console was in its twilight years. Scheduled for North American release in 2000, it was a commercial failure and was never released outside of Japan.

The released version of 64DD included a modem for connecting to the Randnet network, an audio-video adapter (female RCA jack, and line in) called the Capture Cassette to plug into the main cartridge slot, and a mouse and keyboard that plugged into the controller ports.