Interton Video 2000 is a very rare system manufactured and released in 1975 by the German company Interton. It is one of the earliest cartridge based systems sold in Europe.

Although systems like the Magnavox Odyssey were released a few years earlier, the Video 2000 was a very advanced system for its era. As dedicated PONG chips did not exist yet, CMOS chips were used instead. The system contains 14 CMOS chips that draw the basic graphic objects (players, central line and ball), and produce sound effects.

The Video 2000 powers automatically when a cartridge is inserted. A gray knob located near the cartridge slow can be used to tune the video signal, thus allowing fine-tuning on the system instead of the TV. Modern TV sets can easily catch the video signals with this clever feature (Philips Tele-Spiel systems also had this feature). 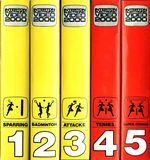 Only 5 Pong related game cartridges are known to exist for this system even though the box-art shows two more games, Car Race and Naval Battle, which were not released. 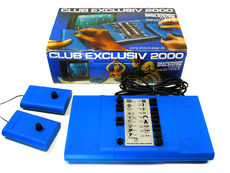 This was made in 1977 for an obscure company called "Club Exclusiv" and did not show any Interton brand on console or box. It did NOT use a cartridge system like the Video 2000, instead it offered the same games as the Video 3000 but came with a set of remote controls with no controls built inside the main unit. For the Video 3000 you had to buy these remote controls seperately (Accessory V350). The Club 2000 is a very rare collector's item today, as it's one of the very few blue Pong consoles worldwide.