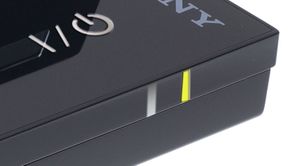 The yellow light of death. The light is only yellow for a brief moment.

The Yellow Light of Death (often abbreviate YLoD) is a common problem which affects non-slim models of the Playstation 3, although there have been some reports of it happening to slim PS3's as well. The YLoD is similar to the RRoD of the Xbox 360 in that both are usually caused by the cracking of the lead-free solder used on the CPU and GPU due to thermal fluctuations. The solution is to either reflow the solder (using a heat source such as a heat gun or conventional oven) or have the chips professionally reballed, which involves removing the chips and reattaching them with fresh, lead-based solder.

For a typical case of a YLoD caused by a motherboard failure, the following happens when you touch the power button:

If the problem is related to the power supply, the fan will not turn on and the green light will last only about a half a second.

YLoD's often occur suddenly. Usually what happens is that the console shuts itself off during gameplay, resulting in a blinking red light. Attempts to turn the system back on result in a YLoD, although sometimes the system will come back on. Even if the system does come back on, it could foreshadow a future YLoD, and I would recommend taking steps to prevent it from occurring, though at that point it may be inevitable.

The YLoD most commonly affects older fat model PS3's, especially launch models with hardware PS2 backwards compatibility. If you have a fat PS3, you should keep an eye out for these warning signs.

The YLoD indicates a general hardware failure and could be related to the motherboard, the power supply, or even the blu-ray drive (unconfirmed).