The Sega Saturn (セガサターン), is a video game console manufactured by Sega and was the successor to the Sega Mega Drive. Initially released in 1994, the Saturn was touted as a "32-bit" compact disc-based system, and was a key player in what is now widely known as the fifth generation of video game consoles. A shaky launch to exclusive retailers featuring only two games and a $399 launch price greatly affected sales, despite a three-month lead to Sony's PlayStation in North America. The Saturn was first released on November 22, 1994 in Japan, "Saturnday", May 11, 1995 in North America, and July 8, 1995 in Europe. It was replaced by the Sega Dreamcast in late 1998. 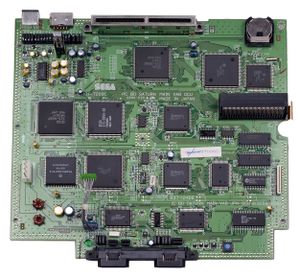 There is no hardware difference between the various versions. Just the BIOS version and the casing. For information regarding the various motherboard revisions, see Sega Saturn Hardware.