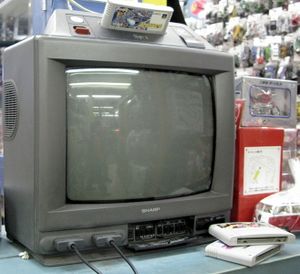 The SF-1 SNES TV (スーパーファミコンテレビSF1), also known as the Sharp Science Fiction-1, is a television produced by Sharp Corporation with a built-in licensed Super Nintendo Entertainment System. Released only to Japanese markets, the unit retailed in 1990 as a next generation sequel to the 1983 C1 NES TV also manufactured by Sharp and licensed by Nintendo. Like the C1, the SF-1 was noted as having superior picture quality to the SNES. 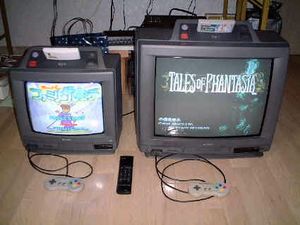 Both units were colored gray, and both included a ROM-cartridge plugin-slot just above the screen.[1]By merging the SNES and the television into one unit, the Sharp SF-1 avoided the problem of exposed power cords and other cables. This gave the unit the advantage of being easier to handle. With internally connected SNES-SF1 terminals, luminance and chrominance signals could be separated,[2]and the resulting image quality was notably sharper than other non-hybrid SNES setups.

Additional functions were added to the remote control such that the SNES portion of the unit can be reset by simultaneously pressing two buttons. Additionally, the remote control could be used to record button gameplay on the VCR. All audio signals are delivered in mono.

Unlike Sharp's earlier C1 NES TV, AV output terminals were made readily accessible on the SF-1's extended terminal which allowed connection to later peripherals such as the Satellaview. The C1 had been notably unable to connect to the FDS (Famicom Disk system) peripheral, and the SF-1's design was intended to alleviate this problem. To use the extended terminal, the Satellaview's AV output terminal would attach obliquely upward on the back of the Super Nintendo portion of the console, and a cover could be applied to prevent dust.