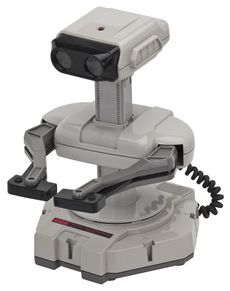 The Famicom Robot and Robotic Operating Buddy were released in Japan and the U.S. in 1985 for the NES, and were compatible with just two games: Stack-Up and Gyromite. The Robot received instructions via optical flashes in the TV screen (only works when coupled with a CRT) through its eye sensors to move its arms left, right, up, down, open or closed. Both Stack-Up and Gyromite come packaged with either the Block set or Gyro set, each changing the way R.O.B. interacts with the game.