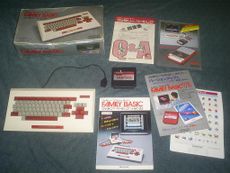 Family BASIC or Famicom BASIC is a dialect of the BASIC programming language that is used to program the Family Computer, its cartridge came with a computer style keyboard, and required an optional Data Cassette Recorder (sold separately) which was also compatible with saving edited stage data in a number of other games .

The whole setup transformed the Famicom into an early 1980's home computer. Several visual components seen in Nintendo games, such as backgrounds and characters from Mario and Donkey Kong games (circa 1984-1985), were made available as basic Family Basic development parts, or have appeared in pre-made Family Basic games. Family BASIC cannot normally be used on NES consoles because they lack the Famicom's 15-pin expansion port.

A redesigned keyboard and Data Recorder were also planned for release in the U.S., but neither materialised. Despite this, a few games like Excitebike, Mach Rider and Wrecking Crew still featured the option to record data, leading to errors if you attempt to save your edited stage data.