Named after Al and Phil Freedman, the brothers who founded APF (which previously manufactured dedicated Pong clones), the APF MP1000 system was a rather obscure video game console. Only 12 cartridges were produced for the system, plus Rocket Patrol, which was built into the console. With the notable exception of Space Destroyers, which was a Space Invaders clone, the games were unexceptional, though certain titles (such as Hangman) looked better than their Atari 2600 counterparts.

Although mediocre (at best) by any standards, the APF MP1000 system is easily superior to the also obscure RCA Studio II. 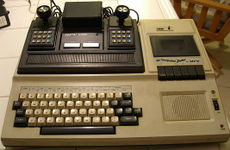 An APF M1000 inside the Imagination Machine

The small black unit, which was also released in a version that dropped the second “P” in the title (meaning it was called the APF  M1000), has two non-removable joysticks, each with a numeric keypad. The system is compatible with a special computer upgrade called "The Imagination Machine", which contains a standard typewriter keyboard, a cassette deck, a music synthesizer, BASIC programming, and an internal operating system.

APF uses the same Motorola MC-6847 VDG as the TRS-80 COCO, Dragon computer, and NEC TREK. But does so in a different way. Like the NEC Trek, the APF dosen't use the SAM memory manager to drive the VDG. It uses it's own memory management system.

This introduces some limitations, like not being able to display a full screen bitmaped image, but also makes it much simpler to manage game graphics.