This is a tutorial which explains how to lubricate the two rails that the laser slides back and forth on. You may need to do this if your 3DO FZ-10 can't read discs and has a laser that won't move. Details on how to diagnose this problem will be available soon. You will need 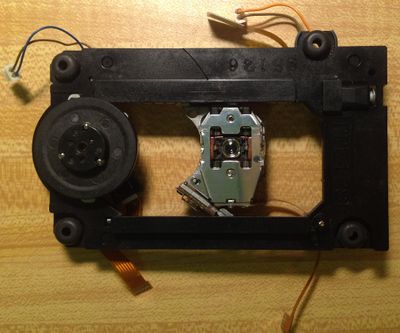 To work on the CD drive, you will need to remove it from the console. Follow this guide through step 6 to open the FZ-10 and remove the drive. Put the rest of the console aside and focus your attention on the drive. 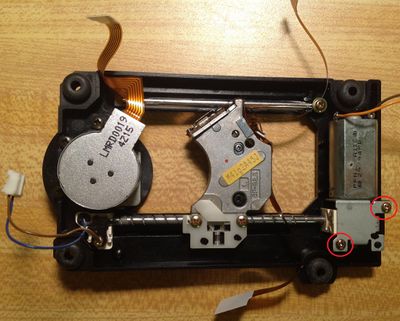 Use your small Phillips-head screwdriver to remove the two screws show in the picture. The laser motor, which is connected to the orange and brown wires, should now be lifted out easily. Be very gentle with the motor, because the connections between the wires and the motor are fragile; the first time I worked on this drive I broke off the brown wire, and while making this guide I broke off the orange wire. They're easy to resolder, but be careful not to short the wires with the metallic casing of the motor.

If you see any gunk on the plastic gear at the end of the motor, you should wipe it off. 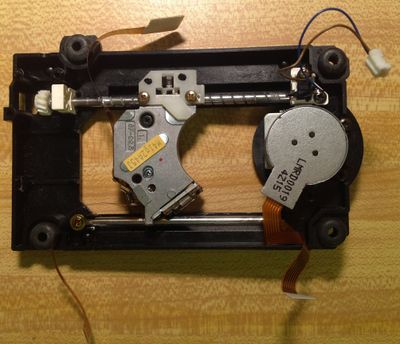 The laser rests on two rails: one is completely smooth, and the other is connected to the laser motor and has a spiral pattern. To remove it, lift up the off-white plastic piece that the spiral rod passes through. Be careful though since the laser loosely rests on the smooth rod and is not connected to it, so the laser may slip and hit your worksurface if you're not careful. Also, the end of the spiral rod near the spindle is only just resting there, and so it will fall as you remove the laser.

Once you've done this, put the laser and spiral rod to the side. Go ahead and lubricate the smooth rod now. If you want, you can remove the screw holding the rod in place to gain full access, but in my opinion it is sufficient to lubricate the section of the rod that is accessible since that's what the laser comes in contact with. Either way, you should first wipe off the old lubrication with a paper towel. Then apply the new grease, but not too much. 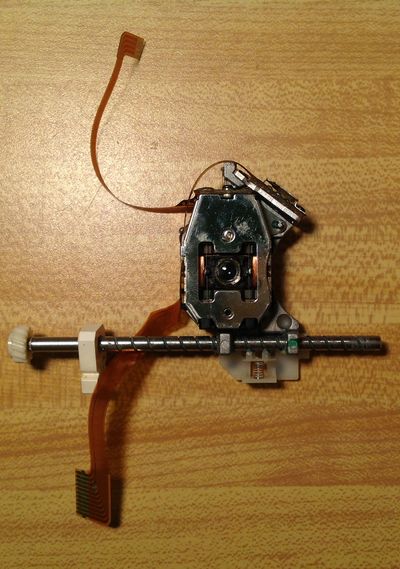 3DO FZ-10 laser removed from the drive

To remove the spiral rod from the laser, just keep turning the plastic gear counter-clockwise until the rod is free. Cover it in grease and rub it into the spiral indentation. To remove the excess lube from the grooves, screw the rod all the way into the laser and all the way back out again, and repeat that a few times. Then wipe off any excess.

We've finished what we came here to do. Screw the rod back into the laser, and don't forget the plastic tab that goes between the laser and the gear.

Step 5 - Put it all back together[edit]

The only tricky part of putting the drive back together is getting the laser and the spiral rail back into place since you have to do three things at about the same time: you need to set the laser on the smooth rails, fit the plastic tab into its spot, and slide the end of the smooth rod in its hole. Here's what I recommend you do, and you should use the picture in step 3 as a guide. Grip the laser from the top and bottom with your fingers, being careful of course not to touch the lens. If you do though, it's not the end of the world and most likely you'll just get it dirty. Slide the plastic tab into place while holding the laser against the smooth rod. Note that the side that goes down (towards the top of the drive) is the end with the hole the spiral rod passes through. Once the plastic tab is firmly in place, slide the spiral rod into the hole. You should slide the rod with the laser and not push it through the laser since the sudden jerky movement will probably make you drop everything. This will probably take a few tries, and even when you do get it, it won't be firmly connected until your reattach the laser sled motor.

Put the motor back into place and replace the screws. Before you put the drive back in, inspect it to make sure grease didn't get anywhere it shouldn't have, and wipe off any that did. After you've put the 3DO back together, you may have to try turning the system on a few times for the laser to start moving again. Try pushing the laser up and down the rails to spread the grease around more. Once you get it to start moving the first time, it should work consistently after that. Cheers, now go play some 3DO!