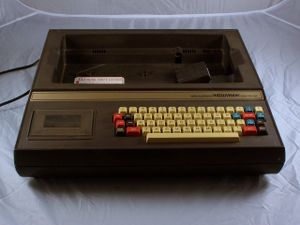 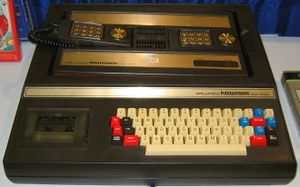 Intellivision inside the Keyboard Component

From the beginning, Mattel attempted to distinguish the Intellivision from the Atari 2600 by stressing that the Intellivision wasn't just a toy -- it was going to be the basis of a home computer system. Slipping the Master Component into the Keyboard Component would unlock the full power of the 16-bit microprocessor in the Intellivision.

The Keyboard Component contained 64K of dual port dynamic RAM and its own 6502 processor to handle I/O functions. Special programs were available on cassettes. The built-in tape deck featured a sophisticated block-addressable cassette interface; an audio track could be synchronized with a program and its graphics. With the provided microphone, parts of the audio track could be re-recorded and played back under program control. A cartridge port allowed standard Intellivision games to be played without removing the Master Component, and a printer port allowed output to a 40-column thermal printer.

The Keyboard was certainly an impressive piece of work, but, from a marketing standpoint, was hopelessly impractical; there was no way to produce it for a reasonable selling price.

Complaints from people who bought the Intellivision specifically because it could be upgraded to a computer caught the attention of the Federal Trade Commission, who started investigating Mattel for fraud. Mattel insisted that the Keyboard was a real product that was still being test marketed; a trickle of Keyboard Components was made available to selected stores and offered by mail to consumers who complained (at a loss to the company). The thermal printer was only available mail order; this was apparently the same printer (except for the nameplate) that later received somewhat wider release as part of the Aquarius system.

Finally, in mid-1982, the FTC ordered Mattel to pay a monthly fine (said to be $10,000) until the Keyboard was in wide distribution. Mattel was forced to go with its back-up plan: it released instead the Entertainment Computer System (ECS) that had been quietly developed by a different division. Although less powerful than the Keyboard Component, it minimally offered what had originally been promised: to turn the Intellivision into a computer. It was sufficient (along with an offer to buy back all outstanding Keyboards) to get the FTC off Mattel's back.

The Intellivision Keyboard Component, with only 4,000 produced, was officially canceled.

But it didn't go quietly: Compro, Inc., the Costa Mesa, California company that had been contracted to manufacture the Keyboard, sued Mattel for ten million dollars, claiming breach of contract, fraud, and nonpayment for the last 1,300 units. This was just one of the lawsuits Mattel, Inc. settled early in 1984 when Mattel Electronics was closed.