"Prinz" and "Prinztronic" were own-brand trade names of the British "Dixons" photographic and electronic goods stores, which have been rebranded as "Currys.digital" stores, and are part of DSG international.

This is a typical system using catridges based on the different chipsets developped by General Instruments in the late 70s. Part of the PC-50X family.

It was basically a rebranded Videomaster Superscore VM-8.

The Prinztronic Tournament Mini is a smaller hand held/home console from 1977. It uses a coaxial cable and six AA batteries to work, it also needs a CRT (cathoradetube) TV with the tuning dials on it. 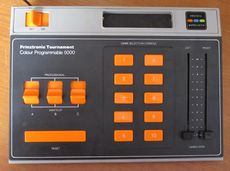 This system is original because of its large selector in the middle of the front panel. It offers the classic 6 games of the General Instruments AY-3-8500 chipset, including two shooting games playable with an optional light gun.

This system was followed by the Videosport 800, which offers more games (8) and a colour display.

The successor of model 600, offers 8 games and a colour display.