This guide details how to competely disassemble a Panasonic 3DO FZ-10, piece by piece. This particular FZ-10 was manufactured in February, 1995.

The tools you'll need are 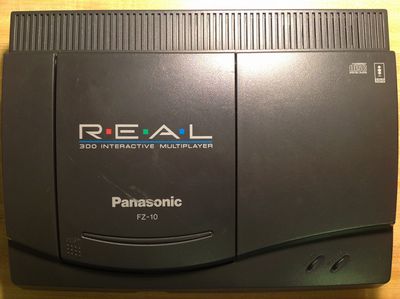 As you would do before taking apart any piece of electronic equipment, unplug all cords from the 3DO and remove any disc if there is one. To be safe, flip the power switch on after removing the power cord. You'll notice that the red LED comes on briefly and then fades away; this is because even when the 3DO, along with almost every other electronic device, is unplugged, many of its components will continue to store an electric charge. By turning the system "on," you dissipate some, but not all, of the electricity in the circuitry. This only reduces your chances of damaging the components, so do still be careful and know what you're doing before proceeding! 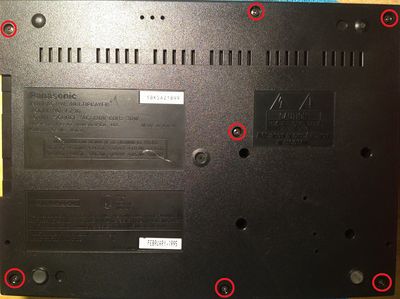 Flip the system over and remove the 7 screws on the bottom. Then turn it back over and lift the top straight up and off. You should feel no resistance when you do this. 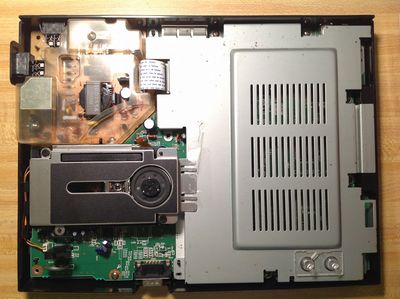 Note that the tape that's holding the CD drive cover to the RF shield is scotch tape in the pic, but originally it was silk tape, When I originally had to figure out how to open the FZ-10, I thought I needed to remove the tape, but it turns out it's unnecessary, and you can just let the cover hang off the RF shield. Because I don't care about replacing the scotch tape, I'm going to remove the drive cover in the next step for convenience, but it is not necessary to detach the two pieces. If you do remove the tape, you should apply new tape or find a way to keep the metal tabs in contact with the RF shield since the point is to keep the drive cover grounded.

To detach the drive cover from the motherboard, you will need to remove 2 black plastic pegs. They are located in the lower-right and upper-left corners of the drive and can be seen in the photo in step 3. This is where your small pliers come in - gently push down the drive cover so you can slide your pliers around the top of the peg and firmly pull it upwards to remove it. You will feel some resistance, but it should snap out. If you have trouble, the pegs extend through the bottom of the case, so you can push a screwdriver through those holes to help you remove the pegs. 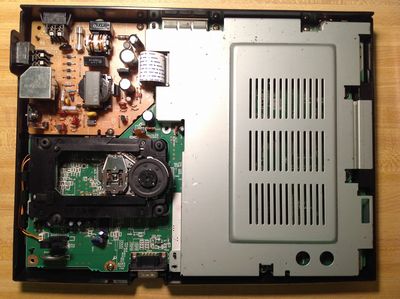 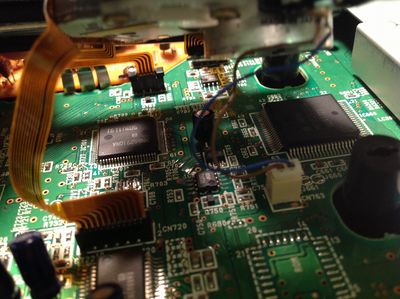 It's difficult to see what's going on in the picture, but this is my attempt to make sense of what's going on under that CD drive. Of the remaining 4 connections, 3 of them are ribbons, and the last is another set of cords, one blue and one brown. I would suggest removing the ribbon cables first. Just grip them from either side and firmly rock them back and forth while pulling upward. Remove the brown and blue cable last. The cables have some length to them, so you can lift the drive somewhat to improve your access. 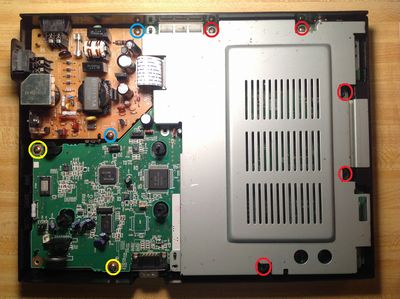 By the way, all the screws inside the case are smaller than the screws on the outside, so you should use a different screwdriver size to avoid stripping the screws.

Step 8 - Lift out the motherboard[edit] 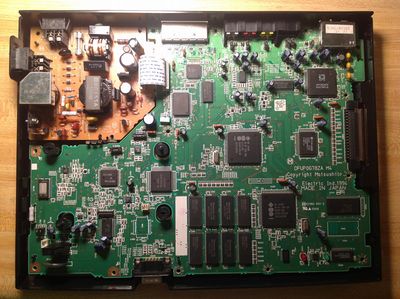 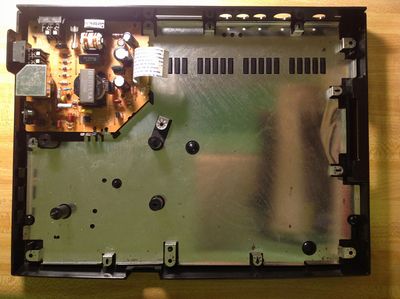 And now all that's left is the power board and the bottom RF shield. I don't know why anyone would need to go beyond this point, but just in case, here's how to remove the final two pieces of the 3DO.

The power board is a bigger pain to deal with, so I'll start with the RF shield. It is glued to the bottom of the case near the expansion port on the right. You can see in the picture that the metal is bent in that spot; it took a lot of force to remove, but it might be necessary if yours is infested with bugs like mine was. 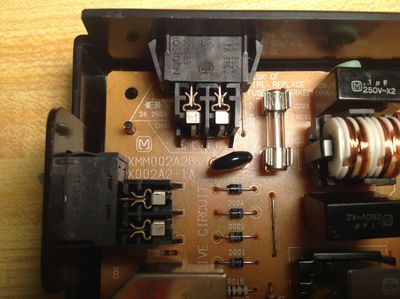 If you need to remove the power supply board, then you must face these plastic covers. There are two, one for the power switch and one for where you plug in the power cable. You cannot remove the power board without removing these first. If you look carefully in the picture, you'll see each of them has two plastic tabs, one on each side. You need to push the tabs inwards and simulatenously push or pull the plastic piece out. The piece where you plug in the power cord is easy; your fingers have plenty of room to push the tabs, and you can easily squeeze a fingernail between the plastic of the case and the piece on the outside of the case and pull it out. The switch is more difficult because of a large nearby capacitor (bottom of photo) which makes it difficult to fit your fingers in to push the tabs if you have large hands. You'll just have to play around with this. 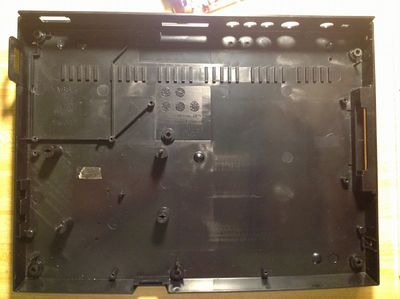 To remove the power board after removing those two plastic pieces, just gently lift the board up and out of the case. For completion, here's the bottom of the FZ-10's case after removing all the components.