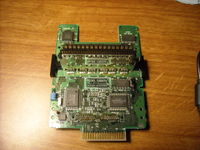 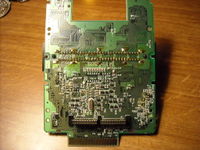 The Famicom Modem (ファミコンネットシステム lit. Family Computer Network System) is a video game peripheral for the Family Computer released only in Japan in 1988 that uses a card based format like NEC's PC Engine. The system acts as a modem, and connected the Famicom to a server through a network cable. The server provided the ability to view news and weather reports, trade stocks and find out game cheats. Content could be downloaded to the Network system as well. The Network system came with its own controller that featured a numeric pad for interacting with the server.

It did provide online play but all of its games with online play were ports of cartridge games and are now very rare to find. The idea of downloading content would later be used in the Super Nintendo's Satellaview, the Nintendo 64DD, the GameCube, the Game Boy Advance Cable, etc.

A modem was tested in the US by the Minnesota State Lottery which would have allowed players to buy scratchcards and play the lottery with their NES. It was not released because some parents and legislators voiced concern that minors might learn to play the lottery illegally and anonymously despite assurances from Nintendo to the contrary.